GP GLIDERS - A WORLD CHAMPION AND A WINNING DESIGN

Newcomers to the competition scene, are getting to grips with GP Gliders, produced by PESZKE S.C. based in Krosno, Poland. July saw their one and only GP 14 prototype, flown by Sebastian Kawa, take the podium’s first place position at the 2nd 13.5 metre Worlds at Szatymaz in Hungary. This - after Kawa had only flown the all new sailplane three times before the competition. The team at GP Gliders were under pressure to get the sailplane ready for this world competition - with the certification being achieved only one week before the first competition day. The GP14 prototype and Kawa were up against competitors with hundreds of soaring hours experience, all flying proven current production models. Nevertheless, Kawa and the ‘GP’ won five out of the 11 completed task days - winning the competition outright. With feedback from Sebastian, a number adjustments and improvements are being made to the production models to ensure an even better performance for the new models about to come off the production line. Without a doubt Sebastian completed the competition with positive impressions. The recorded flight data confirmed all the previous theoretical performance figures - a tribute to the designers and the factory’s decision to put the GP14 into production.
The same design philosophy is being applied to the 15 metre span (the GP15). The factory is now very confident about the performance that will be achieved by the 15 metre version. Here the sport will see yet another (new) self launching concept. Confidence abounds at the factory. Their designs are setting a new level of aerodynamic efficiency for the 15 metre class. Before the World Championships, I attended Aero 2017 at Friedrichshafen and was not disappointed with what I saw. The gliding industry, all kept together in one large exhibition building, one of twelve, in the picturesque little town on the shores of Lake Constance on the German/Switzerland border. Also on display on the GP Gliders stand was the GP15 prototype. This sailplane was built with the standard slim fuselage. The larger fuselage model is 60 mm wider at canopy level. I found the standard fuselage just wide enough for me (6’2’’ and 104 kg) but was unable to close the canopy as my head was about 30 mm too high. The production model will feature a number of minor changes including a new seat-pan layout. It will be much lower in the fuselage allowing the pilot to sit lower and in a more ‘folded’ position as opposed to the current seating which places the pilot in a reclining style. This revised seating layout will allow taller pilots to fit comfortably in the glider - either in the slim or wider fuselage. The GP 15 on display was sold to one of the GP agents - such is the confidence in the product. With its 51:1 L/D and a wing loading of up to 60 kg/m2, this sailplane weighs in at only 190 kg. Few will deny that the GP 15 is a trend-setter. As the photo (left) shows it looks like it’s travelling at 150 knots even when stationary. The GP15 JETA on display has the slim fuselage configuration with the new seating layout. It is the only one in existence at present. You have to be impressed with the finish the Polish manufacturer is achieving. Both the GP14 and the GP15 gliders on display had extremely high gloss finish coupled with a perfect fit of all the control surfaces.

Both gliders are powered by the same 25 kw electric motor produced by MGM Compro, (located in the Czech Republic) - suppliers to NASA, Airbus and Virgin Electric. Their relatively short carbon fibre propeller blades are manufactured by GP Gliders sister company, Peszke. They are based on the same site where the GP gliders are manufactured. The motor can be deployed and running at full power within five seconds providing  confidence in the event of when a ‘low save’ is on the cards. All GP Gliders come with a Ballistic Recovery System as a standard feature. Krosno (The factory home of GP Gliders) is located in south east Poland, a small city of some 50,000 inhabitants. It is in an area known as Aviation Valley which involves six European regions highly specialised in aerospace. It is one of the leading locations in Central Europe for conducting and developing projects associated with aviation. Their manufacturing plants, scientific research centres, and educational and training facilities are renowned as centres of excellence. An interesting spin off from the activities of Aviation Valley is the “University of Technology for Children,” a learning laboratory created by the Aviation Valley Association. It encourages young people’s interest in aeronautic sciences whereby the leading professionals of the cluster companies are teaching children about aviation in the age group from seven to twelve. This is a concept that could no doubt be easily developed in other countries to introduce the very young to gliding! Whilst at the factory, I saw a brand-new set of carbon fibre GP14 wings removed from their moulds and on weighing them Grzegorz Peszke, GP Gliders chief designer, was delighted to announce that they weighed only 31 kg each! An interesting feature is that the GP14 and GP15 share the same fuselage and the fuselage will accept both the 13.5 metre wings and tailplane as well as the 15 metre wings and tailplane. Grzegorz, as well as being GP glider’s chief designer, and a FAI World Champion model flyer, and is the father of Jerzy Grzegorz GP Glider’s CEO. Jerzy’s grandfather was a fighter pilot for the Polish Government in Exile under the RAF during WW2, so the family has a long aviation history.

GP Gliders recently moved to larger premises increasing the available workshop/production space by a factor of three. This additional space will allow for a far more optimised production process which will assist in shortening the current production time. The very first GP14 will become the factory demonstrator. It is planned that there will a demonstrator of each of the other models available at the factory for prospective buyers to examine and test fly. Future projects include the development of an 18-metre glider with a completely new set of wings. A  self launch version of the entry level singe seater aimed at clubs (named the GP11) is also well advanced on the drawing board. With almost 40:1 L/D plus easy handling (similar to the SZD 51-1 Junior) the self launch version of the GP11 will be the entry level glider designed to keep the newly solo pilot determined to advance his/her gliding career. It will have a performance necessary to a be an excellent cross-country sailplane. The factory predicts it to be a safe and easy handling ab initio trainer. The electric propulsion system will further enhance safety by allowing the pilots to choose if they wish to return home or land out. The use of their new electric propulsion system will reduce the workload of the pilot when compared to the two and four stroke engines currently being promoted. This makes it an ideal multi-purpose glider capable of taking the newly solo pilot all the way through to advanced cross country soaring in a relative safe environment - a sailplane that will be ideal for clubs wishing to move their operation into the future of gliding. Pricing is very competitive. We plan to keep readers up to date with regular GP news - so you can be part of this revolution in soaring.

All the above relates to the 13.5 metre self-launcher 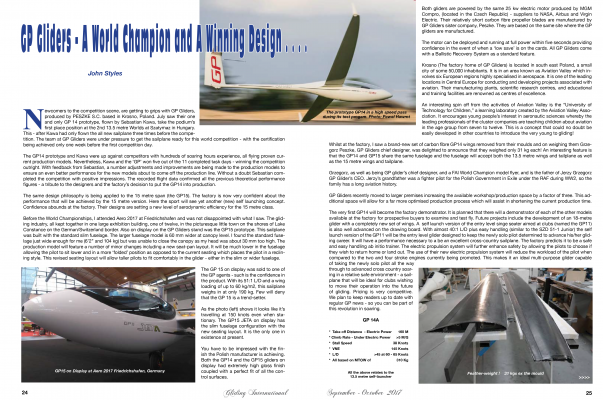 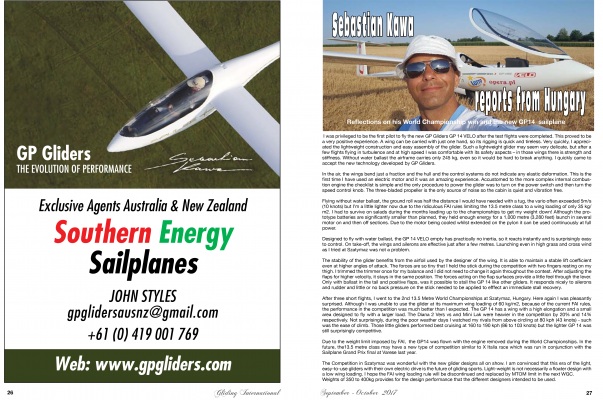